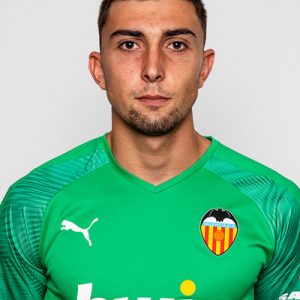 Cristian Rivero Sabater (born 21 March 1998) is a Spanish footballer who plays as a goalkeeper for Valencia CF.

Born in Gandia, Valencian Community, Rivero joined Valencia CF’s youth setup in 2007 at the age of nine, from UD Portuarios Disarp. He made his senior debut with the reserves on 20 August 2017, starting in a 2–0 Segunda División away win against Deportivo Aragón.

Rivero immediately became an undisputed starter for the B-team, and renewed his contract until 2022 on 20 December 2019. For the 2020–21 season, he was definitely promoted to the main squad after the injury of Jasper Cillessen.

Rivero made his first team debut on 16 December 2020, starting in a 4–2 away win against Terrassa FC for the season’s Copa del Rey. His professional debut occurred the following 17 January, as he played the full 90 minutes in a 2–0 away defeat of AD Alcorcón, also for the national cup.