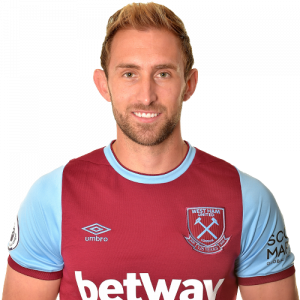 Craig Dawson (born 6 May 1990) is an English professional footballer who plays as a defender for Premier League club West Ham United, on loan from Watford. He has previously played for Radcliffe Borough, Bolton Wanderers, Rochdale and West Bromwich Albion.

Dawson scored two goals on his England under-21 debut against Azerbaijan on 1 September 2011.[ He played 15 matches for England U21s, scoring six goals.

On 2 July 2012, Dawson was selected by Stuart Pearce for the 2012 Great Britain Olympic football team. He featured in the 1–0 victory over Uruguay as a last minute substitution for goalscorer Daniel Sturridge. He also featured in the Olympic quarter-final against South Korea, coming on as a substitute for an injured Micah Richards, and scoring in the penalty shoot-out.

On 12 October 2020, Dawson signed for West Ham on loan for the remainder of the 2020–21 season. The club retained an option to make the transfer permanent at the end of the loan. Dawson did not make his West Ham debut until 29 December 2020. He was named as Man of the Match for his performance in a 0–0 draw away to Southampton. On 11 January 2021, he scored his first goal for West Ham, against Stockport County, in the third round of the FA Cup as West Ham won 1–0. It was his first FA Cup goal for over 10 years since scoring for Rochdale against FC United of Manchester in November 2010. On 26 January 2021, he scored his first Premier League goal for West Ham, in a 3-2 away win against Crystal Palace.