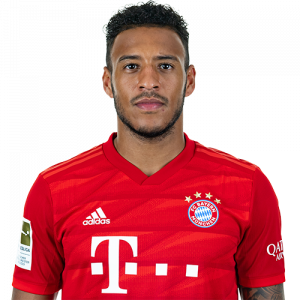 Corentin Tolisso (born 3 August 1994) is a French professional footballer who plays as a central midfielder for Bundesliga club Bayern Munich and the France national team.

A graduate of the Lyon academy, he made his professional debut for the club in 2013 and played 160 matches and scored 29 goals. He joined Bayern Munich for €41.5 million in the summer of 2017, a record for a transfer to a German club.

Tolisso represented France at various youth levels before making his senior debut in 2017. He was part of their squad that won the 2018 FIFA World Cup.

On 14 June 2017, Bundesliga side Bayern Munich secured the signing of Tolisso on a five-year deal from Lyon for an initial transfer fee of €41.5 million, plus up to €6 million in potential bonuses. The fee was the largest ever received by Lyon from the sale of a player, though this record was again broken on 5 July 2017 by the transfer of Alexandre Lacazette to Arsenal for a fee of €53 million. It was also a Bundesliga and Bayern record for a signing, surpassing the previous record of €40 million that the club spent in buying Javi Martínez from Athletic Bilbao in August 2012.

He made his debut for the club on 5 August, starting in a penalty shoot-out victory over Borussia Dortmund which saw Bayern crowned Supercup champions. He then scored on his Bundesliga debut on 18 August, netting Bayern’s second goal in a 3–1 win over Bayer Leverkusen. On 5 December 2017, with qualification to the Champions League knockout stages already secured, Tolisso netted a brace in Bayern’s final group match to earn the club a 3–1 win over PSG; though the result was not enough to see Bayern claim top spot. On 3 April 2018, he scored a thumping long-range goal to double the lead in a 4–0 away victory over SC Freiburg.

On 7 April, Tolisso equalised as Bayern came from behind to defeat FC Augsburg 4–1 and win the league title with five games remaining.