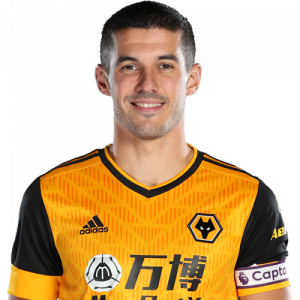 Conor David Coady (born 25 February 1993) is an English professional footballer who plays as a centre-back for Premier League club Wolverhampton Wanderers and the England national team.

Coady came through the academy system at Liverpool and made two appearances for the first team before spending a season on loan at Sheffield United and then moving to Huddersfield Town on a permanent transfer in 2014. A year later he signed for Wolverhampton Wanderers for £2 million and has played over 200 games for the club, winning the Championship in the 2017–18 season.

Coady has also represented England at youth level, being named in the team of the tournament as England won the 2010 UEFA European Under-17 Championship and captaining the England under-20 team at the 2013 under-20 World Cup.

On 3 July 2015, Coady signed for Championship club Wolverhampton Wanderers on a three-year contract for an undisclosed fee, believed to be around £2 million. He scored his first goal for Wolves in a 2–1 EFL Cup first round win against Crawley Town on 9 August 2016.

Under new head coach Nuno Espírito Santo, Coady moved to the centre of a three-man defence for Wolves from the 2017–18 season onward, where he spent much of the season as club captain, and has been full-time captain since the club’s return to the Premier League from the 2018–19 season. In September 2017 he signed a new four-year contract. On 21 April 2018, during his 120th league appearance for Wolves, he scored a 66th-minute penalty in a 4–0 win against Bolton Wanderers to record his first league goal for the club, as Wolves sealed the Championship title.