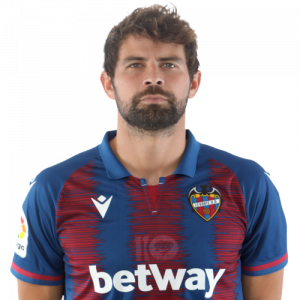 Jorge Andújar Moreno (born 26 April 1987), known as Coke, is a Spanish professional footballer who plays for Levante UD as a right back.

He began his career at Rayo Vallecano, who he helped rise from Segunda División B into La Liga, totalling 204 official appearances. In 2011 he joined Sevilla, with whom he won the Europa League three times.

Rayo Vallecano
Born in Madrid, Coke was a product of Rayo Vallecano’s youth system, being promoted to the main squad for the 2005–06 season at only 18, with the capital club in the Segunda División B. He helped it achieve promotion in his third year, and played 33 matches the following campaign as the team overachieved for a final fifth place (scoring three goals in as many wins, including the game’s only at home against Hércules CF on 7 February 2009).

Sevilla
In early June 2011, Coke signed with fellow league club Sevilla FC, penning a four-year contract. He made his top flight debut on 28 August, coming on for Fernando Navarro at half-time in the 2–1 home win against nearby Málaga CF. He finished his first year with 32 appearances in all competitions.

Coke scored his first league goal with the Andalusians on 17 March 2013, grabbing a brace in a 4–0 home rout of Real Zaragoza. On 14 May of the following year, he played the full 120 minutes and converted his penalty shootout attempt in the final of the UEFA Europa League against S.L. Benfica, as Sevilla went on to win the trophy.

After the departure of Ivan Rakitić to FC Barcelona, Coke captained the team in the 2014 UEFA Super Cup on 12 August, a 2–0 defeat to Real Madrid at Cardiff City Stadium. He featured less throughout the season as new signing Aleix Vidal was reconverted to right back by coach Unai Emery, but played 32 minutes as they retained their Europa League crown with a 3–2 victory over FC Dnipro on 27 May 2015.

On the final day of the 2015–16 campaign, Coke was the first of three players sent off in a 3–1 loss at Athletic Bilbao, being shown a red card for dissent despite not leaving the substitutes’ bench. On 18 May 2016, in the Europa League final, he started as right midfielder in place of injured Michael Krohn-Dehli and scored twice in a 3–1 defeat of Liverpool in Basel, being subsequently named Player of the match.

Schalke 04
On 31 July 2016, Coke signed for German club FC Schalke 04 on a three-year contract for a reported €5 million. During a friendly game with Bologna F.C. 1909 held the following week, he suffered a severe cruciate ligament injury to his right knee.

Levante
On 16 December 2017, struggling with injury problems and lack of playing time, Coke returned to Spain and joined Levante UD on loan until the following 30 June. Subsequently, the move was made permanent on a four-year deal for an undisclosed fee estimated around €1.5 million. He was sent off on 2 September 2018 in a 2–2 home draw with city rivals Valencia CF.