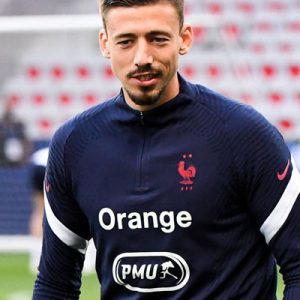 Clément Nicolas Laurent Lenglet (born 17 June 1995) is a French professional footballer who plays as a centre-back for Spanish club Barcelona and the France national team.

Lenglet began his career with Nancy, making 85 appearances from his debut in 2013, and winning the Ligue 2 title in the 2015–16 season. In January 2017, he joined Sevilla for a €5.4 million fee where he went on to make 73 appearances, scoring 4 goals, in an 18-month spell before joining Barcelona for €35 million.

Barcelona
On 12 July 2018, Lenglet joined Barcelona when they triggered his release clause of €35 million. He played the full 90 minutes for Barcelona as he helped them beat his former club Sevilla 2–1 in the 2018 Supercopa de España. On 23 September, Lenglet was sent off in his La Liga debut against Girona following an elbow on Pere Pons. He scored the winning goal in their Copa del Rey clash against Cultural Leonesa in 1–0 win. He scored his first goal for Barcelona in La Liga against Real Sociedad at the Camp Nou. He provided an assist for compatriot Antoine Griezmann for Barcelona’s first goal in a 3–0 win against Eibar away at the Ipurua on 19 October. Lenglet scored his first Champions League goal for the club on 8 August 2020, with a 10th minute header in a 3–1 victory at home against Napoli in Barcelona’s round of 16 second leg match.

On 2 December 2020, Lenglet captained Barcelona for the first time after stand-in captain Sergio Busquets was substituted at half time in a Champions League group stage 3–0 victory against Hungarian top-flight club Ferencváros at the Puskás Aréna in Budapest.