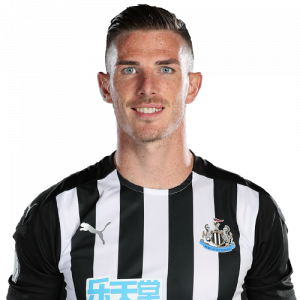 Ciaran Clark (born 26 September 1989) is a professional footballer who plays for Premier League club Newcastle United and the Republic of Ireland national team. Clark is naturally a central defender, but is also able to operate as a central midfielder and at left-back.

Clark captained England at under-18, under-19 and under-20 level, but in October 2010 declared his ambition to play for the Republic of Ireland, the country of his parents’ birth. He was called up to the national team a month later for the friendly match against Norway, and made his full debut against Wales on 8 February 2011.

On 3 August 2016, Newcastle announced that they had completed the signing of Clark. Having established himself alongside club captain Jamaal Lascelles in central defence, he scored his first goal for the club in a 6–0 win against Queens Park Rangers on 13 September 2016. He went on to add further goals against Brentford and Bristol City while also helping Newcastle concede the joint-lowest number of goals in the division as they returned to the Premier League at the first time of asking. He remained a regular starter for Newcastle in league games for the first half of the following season. However, he was left out of the side for most of the second half of the season with Florian Lejeune and Jamal Lascelles being preferred at central defence. In the 2018–19 season he only managed 8 appearances in the first team in the Premier League; however he still managed to score three goals, against Arsenal, Burnley, and Chelsea respectively.

In November 2019 he said he had previously considered leaving Newcastle United in order to maintain his place in the Irish international set-up.