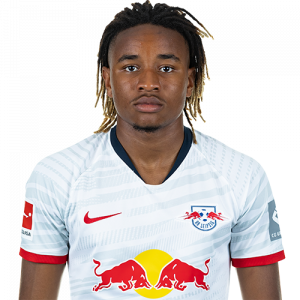 Christopher Alan Nkunku (born 14 November 1997) is a French professional footballer who plays as a midfielder for Bundesliga club RB Leipzig.

Club career
Paris Saint-Germain
Nkunku made his professional debut on 8 December 2015 in the UEFA Champions League against Shakhtar Donetsk, replacing Lucas Moura after 87 minutes in a 2–0 home win. He scored his first professional goal in a 1–0 home win against Bastia in the Coupe de France on 7 January 2017.

International career
Nkunku was born in France and is of Congolese descent. He is a youth international for France. Because of Nkunku’s impressive performances for PSG, there had been calls for him to be called up to the senior national team.