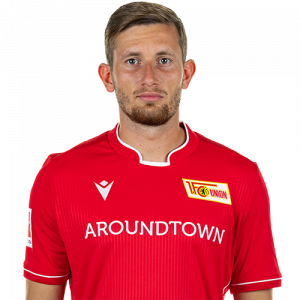 Christopher Lenz (born 22 September 1994) is a German footballer who plays as a defender for Union Berlin.

Born and raised in Berlin, Lenz began playing football at FC Stern Marienfelde in the south of the capital. In addition to a short time in the youth department of Tennis Borussia Berlin, Lenz was mainly trained at Hertha BSC, where he spent a total of twelve years and was promoted to the squad of the second team in the second half of the 2011/12 season.

In 2012 he moved to Borussia Mönchengladbach, where he was initially used in the A youth team, but was promoted to the second team in September. After a total of four years in the Regionalliga West and after his contract had expired, Lenz returned to his hometown for the 2016/17 season and signed a two-year contract with the second division Union Berlin. After he had only been called up to the squad for point games twice in the first half of the season and was substituted on once, he switched to third division Holstein Kiel on loan for the second half of the season.  After Lenz had also played the upcoming second division season with Kiel, he returned to the iron squad for the 2018/19 season. After Berlin’s first promotion to the Bundesliga, he made his debut in the Bundesliga on matchday 1 in a 4-0 home defeat against RB Leipzig.

For the 2021/22 season, Lenz will move to Eintracht Frankfurt free of charge within the Bundesliga after his contract with Union has expired. He signed a contract in the Main metropolis until 2024.