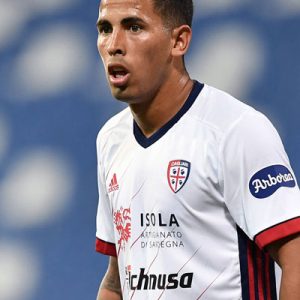 Christian Gabriel Oliva Giménez (born 1 June 1996) is a Uruguayan professional footballer who plays as a defensive midfielder for La Liga club Valencia, on loan from Cagliari.

In January 2018, after scoring 17 goals for the reserve side, Oliva was promoted to Nacional’s first team by manager Alexander Medina, who also worked with him in the B-team. He made his professional debut late in the month, coming on as a second-half substitute for Luis Aguiar in a 3–1 loss against Peñarol, for the year’s Supercopa Uruguaya.

Oliva made his Primera División debut on 10 February 2018, playing 14 minutes in a 3–0 away win against Rampla Juniors. His first goal in the category came on 15 April, as he scored the game’s only in a home defeat of Boston River. A regular starter, he extended his contract until 2020 on 25 April.

Cagliari
On 25 January 2019, Oliva signed to Italian Serie A club Cagliari; the deal was a loan with an obligation to sign permanently until 2023 and an option for a further year. Unused in his first season on Sardinia, he made his debut as a 55th-minute substitute for the injured Luca Cigarini in a 3–1 home win over Genoa, and scored his first goal on 3 November to secure a 2–0 victory at Atalanta.

Valencia
On 1 February, Oliva joined Spanish side Valencia CF on loan for the remainder of the 2020–21 season.