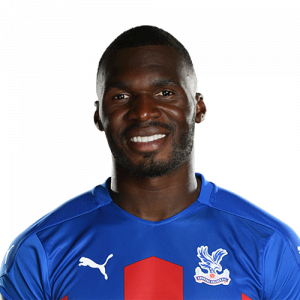 Christian Benteke Liolo (born 3 December 1990) is a Belgian professional footballer who plays as a striker for Premier League club Crystal Palace and the Belgium national team.

Benteke was born in Kinshasa in 1990. He and his family fled during the Mobutu regime and in 1993 emigrated to Liège, Belgium.

He began his career at Standard Liège, playing a part in their 2008–09 Belgian First Division triumph. Following a season at Genk he was signed for £7 million by Aston Villa. He scored 49 goals in 101 matches for Villa across all competitions, including 19 Premier League goals in his debut season and helping them to the 2015 FA Cup Final, before transferring to Liverpool in 2015 for £32.5 million. He spent a single season at Liverpool, scoring a total of ten goals, before being transferred to Crystal Palace at the start of the 2016–17 season.

Benteke has earned over 30 caps for Belgium since making his debut in 2010. He missed the 2014 FIFA World Cup through injury, but was part of their team that reached the quarter-finals of UEFA Euro 2016.