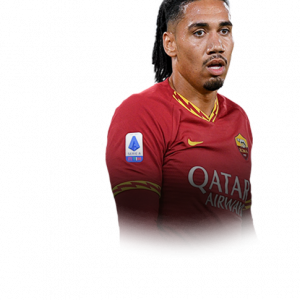 Christopher Lloyd Smalling (born 22 November 1989) is an English professional footballer who plays as a centre-back for Serie A club Roma.

During his youth, Smalling played for the Millwall academy before joining non-League club Maidstone United. After establishing himself in the Maidstone United first team, he signed for Middlesbrough in May 2008. However, shortly after joining Middlesbrough, Smalling had his contract with the club cancelled after raising concerns over homesickness. Soon after, in June 2008, he signed for Premier League club Fulham. He made his professional debut with them in May 2009 and helped them reach the 2010 UEFA Europa League Final the following season.

In January 2010, Smalling signed a pre-contract agreement with Manchester United and joined them officially in July 2010. He made his competitive debut in the 2010 FA Community Shield victory over Chelsea, which earned him his first career medal. He went on to make more than 300 appearances for the club, winning two Premier League titles, an FA Cup, a League Cup, a UEFA Europa League and a further two Community Shields.

Smalling represented the England Schools under-18 team in early 2008, before making his debut for the national under-20 and under-21 teams in 2009. He made his senior international debut in September 2011 and has appeared at the 2014 FIFA World Cup and UEFA Euro 2016.

On 5 October 2020, Smalling signed for Roma permanently on a three-year contract for an initial €15 million fee, potentially rising to €20 million with add-ons.