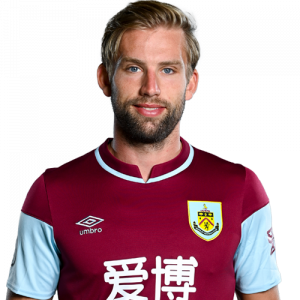 Charles James Taylor (born 18 September 1993) is an English professional footballer who plays as a left back for Premier League club Burnley. He is a former England U19 international.

orn in York, North Yorkshire, Taylor attended Tadcaster Grammar School and played in the junior teams at Leeds United before signing as a scholar with the club upon leaving school in the summer of 2010. During his first year in the youth team, Taylor was a regular for the under-18s, and in the second half of the 2010–11 season established himself in the reserve team, featuring in nine matches. While playing for the under-18s against Newcastle United he scored a goal which would be awarded the LFE’s 2010–11 Academy & Youth Alliance Goal of the Season in April 2011, with LFE chief executive Alan Sykes describing it as an “incredible strike”.

At 17 years of age, Taylor made his first-team debut for Leeds as a second half substitute against local rivals Bradford City in the League Cup on 9 August 2011. He made his Championship debut for Leeds at left back on 10 September against Crystal Palace, replacing the suspended Aidy White. He gained an assist for Ross McCormack’s goal who scored the opener of the match in Leeds’ 3–2 victory. Despite a promising debut, Taylor was dropped for the following match against Bristol City with White coming back into the team. Taylor was named as an unused substitute in the 3–0 loss against rivals Manchester United in the League Cup on 20 September 2011. His appearances in the senior team would lead Taylor to being called up to the England under-19 squad the following month for the Limoges Tournament.

On 18 October 2013, Taylor joined Fleetwood Town on a one-month loan after being signed by manager Graham Alexander. Taylor made his debut for Fleetwood Town on the same day, playing in a 2–0 defeat against Southend United. After impressing in his first month at the club, on 6 November, Taylor’s loan was extended until January 2014. After extending Taylor’s loan, manager Graham Alexander announced his delight in being able to keep Taylor, with Taylor earning rave reviews for his performances. On 17 December, his loan was extended to the end of the season.

On 6 July 2017, Taylor signed a four-year contract with Premier League club Burnley. Since Taylor was under 24, Burnley owed Leeds United compensation, which was due to be set at a tribunal. On 25 July 2017, it was reported by the Yorkshire Evening Post that the clubs had agreed on a compensation of between £6 million and £7 million to be paid by Burnley to Leeds United for the player, avoiding the need for a tribunal decision.