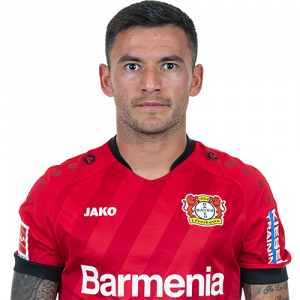 Charles Mariano Aránguiz Sandoval (born 17 April 1989) is a Chilean professional footballer who plays as a midfielder for German club Bayer Leverkusen, whom he captains, and the Chile national team.

With his former club Universidad de Chile, Aránguiz was considered one of the best midfielders in the Chilean Primera División, with a good sense of tactics, impressive stamina and intelligent playmaking, marking and passing abilities. He can play as a defensive, center or even as a right wing midfielder. He is described by FIFA’s official website as “a crafty, tigerish midfielder of the highest order, notable for his ability to win and distribute the ball, pick out passes and hit the back of the net”.

Internacional
On 11 January 2014, it was announced that Aránguiz was signed by Brazilian club Internacional on loan until 15 August 2014 from Granada CF, after its owner Giampaolo Pozzo, who also owns Udinese and Watford, had bought half of his rights from Universidad de Chile. Although he never played for the Spanish club, as he was quickly loaned to the Brazilian club and later sold.

He was named the MVP of the 2014 Campeonato Gaúcho as Internacional won the tournament for a record 43rd time.

On 11 June 2014, Charles Aránguiz’s purchase was announced by Internacional’s board in a joint transaction with investor Delcir Sonda for an undisclosed fee. Aránguiz signed a new contract which expires in June, 2018.

Bayer Leverkusen
On 13 August 2015, Bayer Leverkusen announced that they had signed Aránguiz from Internacional for an undisclosed fee thought to be around £8.6m. He was given the number 20 shirt. Aranguiz was the subject of a fierce transfer battle between Bayer and Leicester City and despite the latter offering him a significantly higher salary, Aranguiz opted to move to Bayer Leverkusen. Aranguiz stated that Leicester was a small club and that he wanted to play in the Champions League. Aránguiz was appointed as club captain ahead of the 2020–21 season, after Lars Bender abdicated the role due to ongoing injury issues.