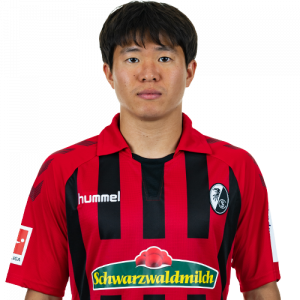 Kwon Chang-hoon (born 30 June 1994) is a South Korean professional footballer who plays as an attacking midfielder for SC Freiburg in the Bundesliga and the South Korea national team. A full international since 2015, he is a winner of the 2015 East Asian Cup. He has also won the 2016 Korean FA Cup with Suwon Samsung Bluewings.

Early career
Kwon started playing soccer when he was in YangJeon Elementary School in Seoul. After he graduated from Joongdong Middle School, he went to Maetan High School to join Suwon Bluewings under-18.

Suwon Samsung Bluewings
Suwon Samsung Bluewings signed Kwon in the 2012 draft under K League homegrown player rule. He made his senior debut on 3 April against Kashiwa Reysol in a 2013 AFC Champions League group stage game as a substitute in 79 minutes. He made his K League debut on 6 April against Daegu FC as a substitute for Oh Jang-eun in 65 mins. He was named in the season Best XI in 2016.

Dijon
In January 2017, Kwon joined Dijon on a 3.5-year deal. The transfer fee paid to Suwon Bluewings was estimated at €1.5 million. In the 2017–18 Ligue 1, Kwon quickly established himself as an ace player for Dijon, finishing joint top scorer with 11 goals in 34 league appearances. He was nominated for the UNFP Team of the Year. However, he didn’t show his former performance next season after his injury in the last league game.