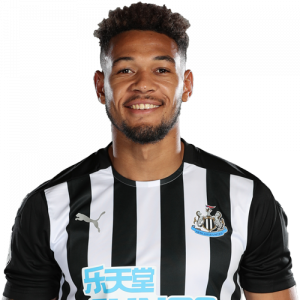 Joelinton Cássio Apolinário de Lira (born 14 August 1996) is a Brazilian professional footballer who plays as a forward for Premier League club Newcastle United. Starting his career with Sport Recife, Joelinton joined Hoffenheim in 2015, and was loaned to Rapid Wien for two years from 2016. He has also been capped for the Brazil under-17 national team.

On 23 July 2019, Joelinton joined Newcastle United on a six-year deal for a reported club record fee of £40 million. He made his debut on 11 August, starting in their 1–0 home loss to Arsenal; he and teammate Miguel Almirón were criticised by the club’s all-time record scorer Alan Shearer for their performances.

Joelinton scored his first Premier League goal on 25 August in a 1–0 victory away at Tottenham Hotspur. It took him until 14 January 2020 to score his second goal for the club, netting the final goal in a 4–1 FA Cup Third Round replay victory over Rochdale.

Joelinton was capped four times by the Brazil under-17 national team in 2012, scoring two goals.