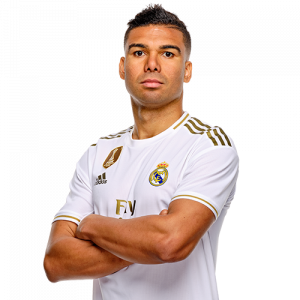 Carlos Henrique Casimiro (born 23 February 1992), known as Casemiro, is a Brazilian footballer who plays as a defensive midfielder for Spanish club Real Madrid and the Brazil national team.

Formed at São Paulo, where he scored 11 goals in 112 official games, Casemiro moved to Real Madrid in 2013, and also spent a season on loan at Porto. He was part of the Real Madrid squad that won four Champions League titles in five seasons, from 2014 to 2018. In total he has won fourteen major trophies at Real Madrid, including four UEFA Champions League, two La Liga, one Copa del Rey and three FIFA Club World Cup trophies.

A full international since 2011, Casemiro was in Brazil’s squad at the 2018 FIFA World Cup as well as four Copa América tournaments, winning the 2019 edition.

In late January 2013, Casemiro was loaned to Real Madrid in Spain, being assigned to the B-team in Segunda División. He played his first game in the competition on 16 February, starting in a 1–3 defeat at CE Sabadell FC.

Casemiro made his La Liga debut on 20 April 2013, playing the full 90 minutes in a 3–1 home win over Real Betis. On 2 June he scored his first goal in Europe, opening the reserves’ 4–0 win over AD Alcorcón at the Alfredo di Stéfano Stadium; eight days later, the move was made permanent for four years and a fee of R$18.738 million.

Casemiro was loaned to FC Porto on 19 July 2014, in a season-long loan. He totalled 40 games overall for the Portuguese, netting four times including a free kick on 10 March 2015 in a 4–0 home win (5–1 aggregate) over FC Basel in the last 16 of the UEFA Champions League.

On 5 June 2015, Casemiro returned to Real Madrid who activated his buyback clause, and two months later his contract was extended until 2021. On 13 March of the following year, he scored his first competitive goal for the Merengues, heading home an 89th-minute corner kick by Jesé in a 2–1 victory at UD Las Palmas.

After being mostly a reserve player under Rafael Benítez, Casemiro became first-choice under his successor Zinedine Zidane, and contributed with 11 appearances in the season’s Champions League as the tournament ended in a win. In the final against Atlético Madrid, he featured the full 120 minutes in a 1–1 draw in Milan (penalty shootout triumph).

Casemiro scored four goals in 25 matches in the 2016–17 campaign, helping his team win the national championship for the first time in five years. He scored a long-range strike in the Champions League final against Juventus FC, helping his side to a 4–1 victory; he again found the net on 8 August 2017, putting his team ahead in an eventual 2–1 defeat of Manchester United for the UEFA Super Cup.

During the 2017–18 Champions League, Casemiro made 13 appearances while scoring one goal, when Madrid won their third consecutive and 13th overall title in the competition.

He was a regular starter during the league season, as Real Madrid won the 2019–20 La Liga.