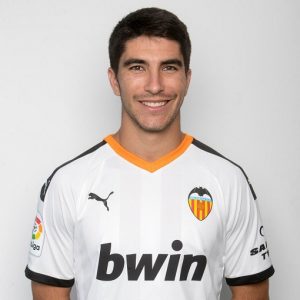 Carlos Soler Barragán (born 2 January 1997) is a Spanish professional footballer who plays for Valencia CF as a central or right midfielder.

He has spent his entire professional career at Valencia, making over 150 appearances and winning the Copa del Rey in 2019.

Born in Valencia, Soler joined hometown club Valencia CF’s youth setup in 2005 at the age of eight after impressing them while playing for Bonrepòs, the team of his neighbourhood. Initially a prolific striker, he was pushed back to an attacking midfielder and to central midfielder during his graduation at Valencia He made his senior debut with the reserves on 3 May 2015, starting in a 0–1 Segunda División B away loss against UE Cornellà.

Soler scored his first senior goal on 13 December 2015, netting his team’s second in a 2–2 draw at CF Badalona. The following 12 March he renewed his contract, and was an unused substitute in the main squad’s 2–1 home win against Athletic Bilbao for the season’s UEFA Europa League.

On 10 December 2016 Soler made his first team – and La Liga – debut, replacing Mario Suárez in a 2–3 loss against Real Sociedad at the Anoeta Stadium. He scored his first goal in the category the following 21 January, netting the first in a 2–0 Valencian Community derby win against Villarreal CF at the Estadio de la Cerámica. He was sent off on 4 February in a 4–0 loss to SD Eibar at the Mestalla for a tussle with Gonzalo Escalante during a corner kick routine, conceding a penalty.

In January 2018, Soler signed his third new contract with Valencia in little over a year, tying him to the club until 2021 and increasing his release clause to €80 million. He totalled 51 appearances in 2018–19, including 13 in his debut European season in the UEFA Champions League and Europa League; he scored in group-stage wins over BSC Young Boys and Manchester United in the former. He played seven games in the season’s Copa del Rey as Valencia won their first honour for 11 years, and assisted Rodrigo’s winner in the 2–1 final victory over FC Barcelona on 25 May 2019.

On 17 December 2019, Soler signed a four-year contract extension, keeping him at the club until 2023, with his release clause set at €150 million.

On 8 November 2020, Soler scored the first hat-trick of his career in a 4–1 league win over Real Madrid, with all three goals coming from penalties; only two La Liga players had ever scored such a treble before.