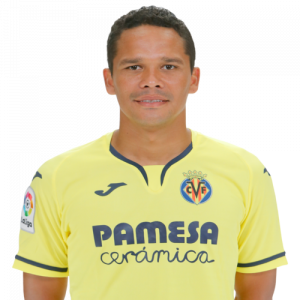 Carlos Arturo Bacca Ahumada (born 8 September 1986) is a Colombian professional footballer who plays as a striker for Spanish club Villarreal.

Bacca began his career at Atlético Junior, where he was top scorer in the 2010 Categoría Primera A Apertura. In January 2012, he moved to Club Brugge, where he was the Belgian Pro League’s top scorer in his only full season before joining Sevilla for €7 million. He won the UEFA Europa League in both of his first two seasons with the club, scoring twice in the 2015 final. In the summer of 2015, he joined Serie A side A.C. Milan for €30 million.

An international for Colombia from 2012 to 2018, Bacca represented the country at the 2014 and 2018 FIFA World Cups, the 2015 Copa América, and the Copa América Centenario, in which they finished third. He is renowned for his pace, aggression, eye for goal, and determination as a forward.

Villarreal
On 16 August 2017, Villarreal confirmed the signing of Bacca on a one-year loan deal for a fee of €2.5 million, with the option to purchase the player for an additional €15.5 million. Four days later he made his debut in the first game of the new season, starting in a 1–0 loss at Levante alongside fellow debutant Enes Ünal. He scored his first goal for the Yellow Submarine on 10 September, capitalising on an error by Real Betis goalkeeper Antonio Adán to open a 3–1 win at the Estadio de la Cerámica.

On 17 August 2018, Bacca was sold to Villarreal as part of a transaction for Samu Castillejo.