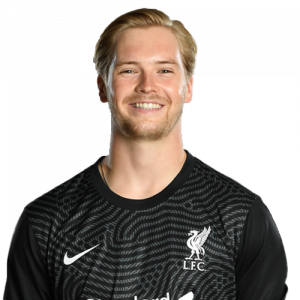 Caoimhín Odhrán Kelleher (born 23 November 1998) is an Irish professional footballer who plays as a goalkeeper for Premier League club Liverpool.

Kelleher joined Liverpool’s academy from Ringmahon Rangers in summer 2015. He featured regularly for Liverpool’s side during their pre-season programme of 2018 and was part of the squad that travelled to the United States for Liverpool’s summer tour.

In August 2018, he signed a new contract with Liverpool. He was an unused substitute for the 2019 UEFA Champions League Final against Tottenham Hotspur. In winning the Champions League, he became the 12th Irish footballer to do so and the first for over a decade.

Though he was recovering from wrist surgery, Kelleher was on the bench for Liverpool’s victory in the 2019 UEFA Super Cup against Chelsea in Istanbul due to the absence of first-choice Alisson. He made his competitive debut for the club on 25 September 2019 in an EFL Cup Third Round match, keeping a clean sheet against League one side Milton Keynes Dons, in a 2–0 away win.

On 1 December 2020, he started and kept a clean sheet in a 1–0 victory against Ajax in the Champions League. Five days later, Kelleher was named in the starting line-up for a Premier League match against Wolverhampton Wanderers. He kept a clean sheet in the match, a 4–0 win, which was his third consecutive shutout for the club. At 22 years and 13 days, Kelleher became the third-youngest Liverpool goalkeeper to keep a Premier League clean sheet and the youngest to do so on his first league start.