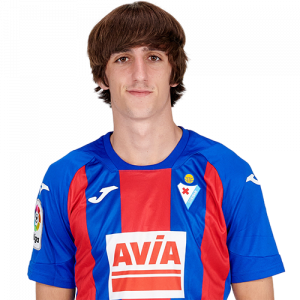 Bryan Gil Salvatierra (born 11 February 2001) is a Spanish professional footballer who plays as a winger for La Liga club Eibar, on loan from Sevilla.

Born in L’Hospitalet de Llobregat, Barcelona, Catalonia, he and his family moved to Barbate, Andalusia when he was a child and he was mainly raised there. In 2012, Gil joined Sevilla FC’s youth setup, moving there from his hometown side Barbate CF. Promoted to the reserves ahead of the 2018–19 season, he made his senior debut on 26 August 2018, starting in a 0–1 Segunda División B home loss against UD Ibiza.

Gil scored his first senior goal on 8 September 2018, netting the equalizer in a 2–1 home win against San Fernando CD. On 12 December, already a regular starter for the B-side, he renewed his contract until 2022. On 23 February 2019, he was given a straight red card in a 2–1 win at Granada CF B, and two teammates were also sent off for arguing the dismissal.

Gil made his first team – and La Liga – debut on 6 January 2019, coming on as a late substitute for goalscorer Wissam Ben Yedder in a 1–1 home draw against Atlético Madrid. He made ten more appearances – all off the bench – in his first season for the team, and scored on 25 April to conclude a 5–0 win over Rayo Vallecano at the Ramón Sánchez Pizjuán Stadium; the strike made him the first child of the 21st century to net in Spain’s top flight.

On 29 November 2019, Gil scored his first goal in European competition when he scored in a UEFA Europa League game against Qarabağ FK which ended 2–0 in favour of Sevilla. The following 31 January, he moved to fellow top tier side CD Leganés on loan for the remainder of the season. On 19 July 2020, Gil scored against Real Madrid in a 2-2 home draw on the final day of the season.

On 5 October 2020, Gil was loaned to fellow top tier side SD Eibar for the 2020–21 campaign, along with teammate Alejandro Pozo.