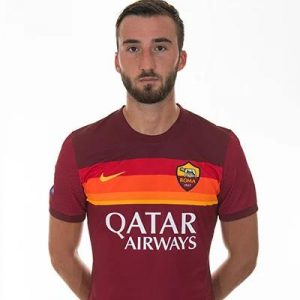 Bryan Cristante (born 3 March 1995) is an Italian professional footballer who plays as a midfielder for Serie A club Roma and the Italy national team.

Early career
Cristante was born in San Vito al Tagliamento but raised in the nearby San Giovanni di Casarsa, where he started playing football as a child. He moved on to Liventina Gorghense, an amateur club in the province of Treviso, before joining A.C. Milan in 2009.

Benfica
On 1 September 2014, Cristante signed a five-year contract with Portuguese champions Benfica[ for a transfer fee of €4.84 million.

Atalanta
Cristante joined Atalanta on loan from Benfica in January 2017; Atalanta later bought him outright in summer 2018 for the €4 million release clause, in a total fee of €9.5 million, with Benfica keeping 15% of Cristante’s economic rights.

Roma
On 8 June 2018, Cristante was immediately loaned out to Roma in a one-year loan deal from Atalanta for a fee of €5 million with a compulsory purchase option for an additional €15 million and a further €10 million in performance-related bonuses. On 28 February 2019, Roma made the deal permanent.