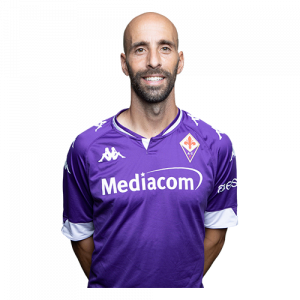 Borja Valero Iglesias (born 12 January 1985) is a Spanish professional footballer who plays as a midfielder for Italian club Fiorentina.

He began his career with Real Madrid but did not have any impact with its first team, and played for Mallorca and in England for West Bromwich Albion before joining Villarreal in 2010. He also spent several years in Serie A, with Fiorentina and Inter Milan.

On 1 August 2012, Fiorentina agreed with Villarreal for the transfer of Valero. The move was confirmed three days later, and he joined the Serie A side alongside teammate Gonzalo Rodríguez; after joining, he said leaving his previous club was not easy and that he still had not come to terms with its relegation.

Valero made an immediate impact at the Viola, scoring five league goals in 37 games in his first season and providing 11 assists as the team qualified to the Europa League. He scored his first goal in 2013–14 on 15 September in a 1–1 home draw against Cagliari, and, on 2 November, contributed to a 2–0 success at Milan; subsequently, he was named in Goal.com’s Serie A Team of the Season.