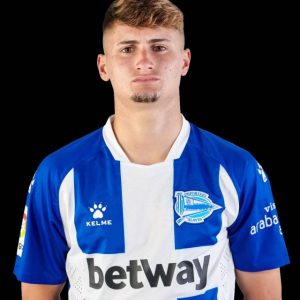 Borja Sainz Eguskiza (born 1 February 2001) is a Spanish professional footballer who plays as a right winger for Deportivo Alavés.

Born in Leioa, Biscay, Basque Country, Sainz joined Athletic Bilbao’s Lezama in 2012, from lowly locals AD Lagun Artea. In August 2017, he signed for Deportivo Alavés after refusing a contract renewal from the Lions.

On 2 September 2018, Sainz made his senior debut with the reserves at the age of just 17, playing the last three minutes in a 3–0 Tercera División home win against SD San Pedro. He scored his first senior goal on 7 October in a 2–0 home defeat of SD Beasain, and finished the campaign with five goals in 18 appearances.

Sainz made his first team – and La Liga – debut on 25 August 2019, coming on as a second-half substitute for Luis Rioja in a 0–0 home draw against RCD Espanyol; by doing so, he became the first player of the 21st century to appear for the senior side. He scored his first goal in the category on 18 June of the following year, netting the opener in a 2–0 home defeat of Real Sociedad.