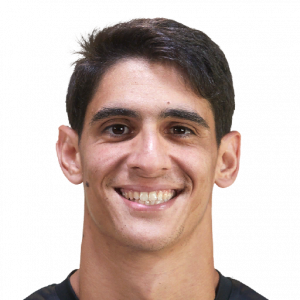 Yassine Bounou (born 5 April 1991), also known as Bono, is a Moroccan professional footballer who plays as a goalkeeper for La Liga club Sevilla and the Morocco national team.

Sevilla
On 2 September 2019, after suffering relegation with the Catalans, Bono joined Sevilla FC in the top tier, on loan for one year. Second-choice to Tomáš Vaclík in the league season, he played regularly in the domestic cup and as the side won the 2019–20 UEFA Europa League, earning plaudits for his performance against Wolves in the quarter-finals as he saved a penalty from Raúl Jiménez to earn a 1–0 win, also in the 2–1 semi-final win over Manchester United, and eventually his decisive save of Romelu Lukaku’s one-on-one strike, to win the final 3–2 against Inter Milan.

On 4 September 2020, Bono signed a permanent four-year contract with the Andalusians.

On 20 March 2021, in the last minute of a match against Real Valladolid, Bono scored his first goal as a professional goalkeeper, securing a 1–1 draw.