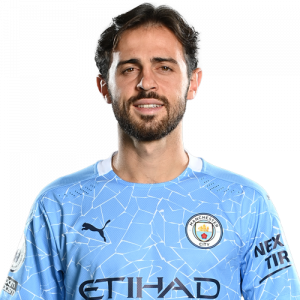 Bernardo Mota Veiga de Carvalho e Silva (born 10 August 1994), known as Bernardo Silva or simply Bernardo, is a Portuguese professional footballer who plays as a midfielder or a winger for Premier League club Manchester City and the Portugal national team.

Born in Lisbon, Silva came through Benfica’s youth academy. He began playing for Benfica B in 2013 and was promoted to the first-team in 2014, playing a few minutes with the latter. He was on loan at the Ligue 1 side Monaco during the 2014–15 season, with Les Monégasques making the move permanent in winter 2015. After winning the national championship with them in 2017, he was signed by English club Manchester City for a reported fee of £43.5 million. He subsequently won the Premier League and EFL Cup in his first season in England, following this up with a domestic treble the following season. He had a significant role in City becoming the first men’s team in England to win a domestic treble, being named Manchester City’s Player of the Year in 2019 and being part of the PFA Premier League Team of the Year. Afterwards, Silva was listed among the 30-man shortlist for the Ballon d’Or.

Silva made his senior debut for Portugal in 2015 after previously being capped by the nations’s youth teams at under-19 and under-21 levels. He was chosen in Portugal’s squads for the 2017 Confederations Cup, 2018 World Cup and 2019 UEFA Nations League Finals on home soil, winning the latter tournament, while also being named as the Player of the Tournament.

Silva is a diminutive, elegant, and creative left-footed playmaker, with a slender build, who is capable of playing in several attacking and midfield positions. Throughout his career, he has been fielded in a variety of roles, including as a winger on either flank (although he favours the right side of the pitch), as a central midfielder, as a deep-lying playmaker, as an attacking midfielder, or even as a second striker; he has also been deployed in a false-9 role, or even as wing-back on occasion. He is mainly known for his technique, acceleration, agility, passing, vision, and dribbling skills, as well as his energy and defensive work-rate, which enables him to cover ground, press opponents, and start attacks after winning back possession. Although he is known for his ability to carry the ball forward, run at defences, and retain possession, he is also known to be an intelligent team player, with a strong personality, who prefers to participate in the build-up of offensive plays rather than undertaking individual dribbling runs. Despite primarily being a creative midfielder, he is also capable of scoring goals himself.