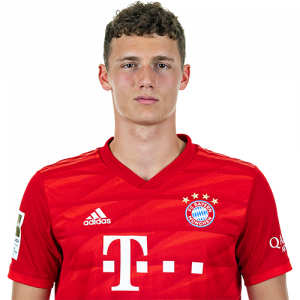 Benjamin Jacques Marcel Pavard (born 28 March 1996) is a French professional footballer who plays as a right back for Bundesliga club Bayern Munich and the France national team. Although usually deployed as a right-back, he is also capable of playing as a centre-back.

He began his career at Lille in Ligue 1 and transferred to VfB Stuttgart in 2016, where he won the 2. Bundesliga in his first season. In January 2019 he agreed a move to Bayern Munich, which was completed after Stuttgart’s relegation at the end of the season. In 2020, he completed an historic sextuple by winning the Bundesliga, DFB-Pokal, Champions League, DFL-Supercup, UEFA Super Cup and Fifa Club World Cup.

Pavard made his international debut for France in November 2017, and won the 2018 FIFA World Cup.

Bayern Munich
On 9 January 2019, Bayern Munich confirmed Pavard would join the club for the 2019–20 season, signing a five-year contract lasting until 30 June 2024.

He made his competitive debut on 3 August in a 2–0 defeat in the 2019 DFL-Supercup against Borussia Dortmund, as an 80th-minute substitute for Thiago Alcântara. On 31 August, he scored his first goal for the club to equalise in a 6–1 home win over Mainz 05. On 11 February 2021, Pavard scored Bayern’s only goal in a 1–0 win against Tigres UANL in the 2020 FIFA Club World Cup Final, as the club won its sixth trophy in a year.