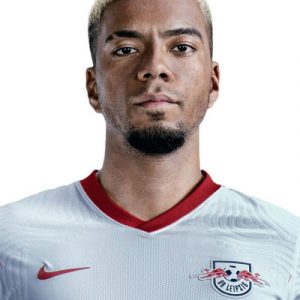 Benjamin Henrichs (born 23 February 1997) is a German professional footballer who plays as a full-back or midfielder for Bundesliga club RB Leipzig, on loan from Ligue 1 club AS Monaco.

Bayer Leverkusen
Henrichs is an academy graduate of Bayer Leverkusen, whom he joined at the age of seven, and captained the side at under-19 level. Having impressed during his formative years with the club, he was promoted to the senior side in 2015 and made his Bundesliga debut on 20 September when he came on as a second-half substitute for Karim Bellarabi in a 3–0 defeat to Borussia Dortmund. He became a regular with the side the following season during which he amassed 29 appearances for the campaign. He ultimately went on to make over 80 appearances for the club across all competitions before signing for Ligue 1 side AS Monaco in August 2018.

AS Monaco
On 28 August 2018, Henrichs joined Monaco on a five-year contract.

RB Leipzig (loan)
On 8 July 2020, Henrichs joined RB Leipzig on a season-long loan. The deal included an option to buy for €15 million at the end of the season.