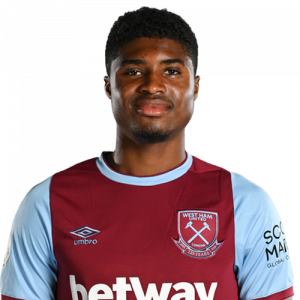 Benjamin Anthony Johnson (born 24 January 2000) is an English professional footballer who plays as a right back or left back for Premier League club West Ham United.

Johnson was born in Waltham Forest, Greater London. He is the nephew of former Manchester United and England full-back Paul Parker and cousin of former England and Tottenham Hotspur defender Ledley King.

Johnson joined West Ham United at the age of seven. Originally an attacking winger, Johnson was converted to a full-back as his youth career progressed. He was named on the bench for West Ham’s 2–1 loss at Manchester City on 3 December 2017, and he signed his first professional contract when he turned 18 in January 2018.

On 27 February 2019, Johnson made his Premier League debut for West Ham, starting at left-back away at champions Manchester City in a 1–0 defeat at the City of Manchester Stadium. Two serious hamstring injuries and the form of fellow defender, Jeremy Ngakia prevented Johnson from making another appearance until 17 July 2020 when he played in West Ham’s 3–1 win against Watford.

On 27 December 2020, Johnson scored his first goal for the Hammers and first professional goal, against Brighton & Hove Albion to level in a game which finished 2–2.