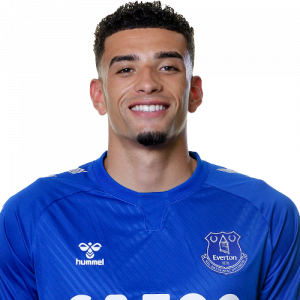 Benjamin Matthew Godfrey (born 15 January 1998) is an English professional footballer who plays as a centre-back for Premier League club Everton and the England national under-21 team.

Godfrey signed for Premier League club Everton on 5 October 2020 on a five-year contract for an undisclosed fee, reported by The Athletic to be an initial £20 million, potentially rising to £25 million in add-ons. He made his debut on 17 October in a Merseyside derby against Liverpool in a 2–2 draw at home in the Premier League, coming on as a 31st-minute substitute after an injury to Séamus Coleman. Adam Jones of the Liverpool Echo said that Godfrey “was thrown into the deep end for his debut and stood up to the task very well”.

Godfrey received his first call-up for the England national under-20 team ahead of their 2018–19 Under 20 Elite League fixtures against Poland and Portugal in March 2019. He made his debut when starting in the 3–1 defeat at home to Poland. He made two appearances for the under-20s.

Godfrey was included in the England national under-21 team for the first time for their 2021 UEFA European Under-21 Championship qualification matches against Turkey and Kosovo in September 2019. He made his debut as an 81st-minute substitute during a 3–2 away win against Turkey on 6 September. He started the following match as captain, as England beat Kosovo 2–0 at home. Godfrey scored his first international goal on 8 September 2020 in a 2–1 away win against Austria in 2021 UEFA European Under-21 Championship qualification with a sliding finish after a well-timed run.