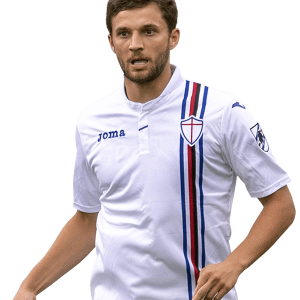 Bartosz Bereszyński (born 12 July 1992) is a Polish professional footballer who plays as a defender for Sampdoria and the Poland national team.

Born in Poznań, Bereszyński played youth football with TPS Winogrady Poznań, Poznaniak Poznań, Warta Poznań and Lech Poznań. He played senior football with Lech Poznań, Warta Poznań and Legia Warsaw. While with Lech Poznań, he played in the UEFA Europa League qualifying rounds. He was one of the very few players to have moved voluntarily from Lech to Legia, who are fierce rivals, was nicknamed “Judas” and received a violent reaction from the Lech fans.

Bereszyński was sent off in the last round of the 2013–14 UEFA Europa League Group stage, and was suspended for the next three European matches. He did not feature in the second round nor the first leg of the 3rd qualification round in the 2014–15 UEFA Champions League. However, as his club failed to include him in their squad registration for the second round matches, he had not finished his suspension when he came on as a sub in the 86th minute in the return leg against Celtic F.C. in the third round. Legia won the match 2–0, and 6–1 on aggregate. However, after considering the mistake, UEFA set the result to a 3–0 win for Celtic. This made the Scottish team winners on the away goals rule.

In January 2017, Bereszyński moved to Italy, signing a four-year deal with Sampdoria.