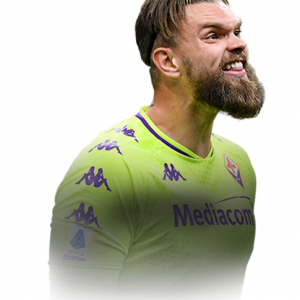 Bartłomiej Drągowski (born 19 August 1997) is a Polish professional footballer who plays as a goalkeeper for Serie A club Fiorentina and the Poland national team. He began his career with Polish side Jagiellonia Białystok where he made over 50 appearances before joining Fiorentina in 2016.

Fiorentina
On 4 July 2016, he signed a five-year contract with Serie A side Fiorentina. He endured a difficult first season at the club, finding himself as third-choice goalkeeper behind Ciprian Tătărușanu and Luca Lezzerini, and later Marco Sportiello, before picking up a knee injury which ruled him out for several months. His debut, and only league appearance for the season, came on the final day of the campaign when he started in a 2–2 draw with Pescara.

Loan to Empoli
On 22 January 2019, Dragowski joined to Empoli on loan until 30 June 2019. He made the headlines after keeping a clean sheet and having made 17 saves in the Serie A match against Atalanta on 15 April, a new league record. In total, he faced 47 shots, of which 18 were on target.