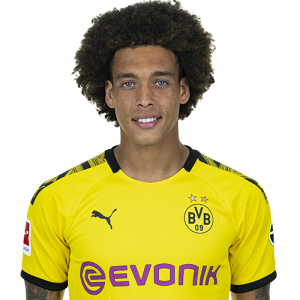 Axel Laurent Angel Lambert Witsel (born 12 January 1989) is a Belgian professional footballer who plays for German club Borussia Dortmund[4] and the Belgian national team. Witsel broke into Belgium’s first team as a right-winger, and can also play attacking midfielder, though his natural position is as a central midfielder.

He began his career at hometown club Standard Liège, making 183 appearances and scoring 42 goals while winning five domestic trophies. He was awarded the Belgian Golden Shoe in 2008. After a season in Portugal with Benfica, he signed for Zenit Saint Petersburg for a €40 million fee in 2012. Witsel won four honours during his time in Russia, before leaving for Tianjin Quanjian in January 2017. He returned to Europe with Borussia Dortmund in August 2018.

Borussia Dortmund
On 6 August 2018, Witsel signed for Bundesliga club Borussia Dortmund and agreed a four-year contract which lasts until 30 June 2022. On 21 August, he scored an equalizing goal in the stoppage time to make it 1–1 after coming on as a substitute on his debut for the club against SpVgg Greuther Fürth in the DFB-Pokal first round match and later his side went on to win the match in the extra time with a 2-1 victory. Witsel scored his first Bundesliga goal on his league debut for the club with an overhead kick in a 4–1 victory over RB Leipzig on 26 August.