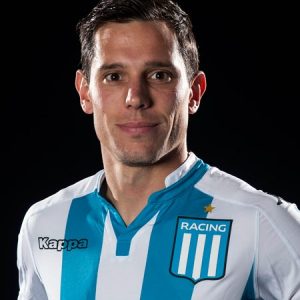 Born in Rosario, Solari began his career at River Plate and was a member of the sides that won the 2013–14 Primera Divisón, 2014 Copa Sudamericana and 2015 Copa Libertadores titles, among others. He scored his only goal for La Banda on 29 March 2015 in a 3–2 win at Gimnasia de La Plata.

At the end of 2015, Solari was loaned for a year to Nelson Vivas’ Estudiantes de La Plata. In February 2017, this agreement was extended for a further year. On 25 May he scored the only goal of a home win over Botafogo in the Copa Libertadores group stage, though the team did not advance.

In July 2017, Solari transferred to Racing Club on a four-year deal, after being removed from Marcelo Gallardo’s plans. The following 6 May, on his return to Estudiantes, he was sent off after 39 minutes of a 2–1 win. He added another league title to his tally in 2018–19; he contributed a career-best five goals to their campaign.

On 23 January 2021, Solari joined La Liga club RC Celta de Vigo on a 21⁄2-year deal. He was signed by his former Racing manager Eduardo Coudet, for a fee of €500,000. He made his debut on 1 February in a goalless draw at Granada CF, replacing Nolito after an hour.