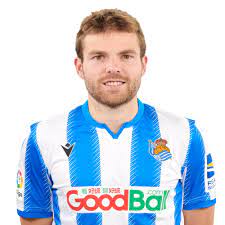 Asier Illarramendi “Illarra” Andonegi (born 8 March 1990) is a Spanish professional footballer who plays for and captains Real Sociedad as a defensive midfielder.

He developed at Real Sociedad, appearing in 56 competitive matches with the first team and helping them qualify for the Champions League in 2013. He then transferred to Real Madrid for €32.2 million, the most they had ever paid for a Spanish player, returning to his first club for half of that fee two years later.

Illarramendi earned 31 caps for Spain from under-17 to under-23 level, winning the 2013 European Championship with the under-21 side. He made his senior debut in 2017.

On 26 August 2015, Illarramendi returned to Real Sociedad, signing a six-year deal– the transfer fee was not officially disclosed by the clubs, but was stated in the media as being between €15–17 million, around half of the figure paid in the opposite direction two years previously. He made his league debut in his second spell three days later, starting and being booked in a 0–0 home draw against Sporting de Gijón. He recorded his first goal for the team in his second spell on 25 October, in a 4–0 win at Levante UD.

In the 2016–17 campaign, Illarramendi had the second-highest number of interceptions across Europe’s five major leagues behind only Chelsea’s N’Golo Kante. However, he was also noted for his poor disciplinary record, having racked up ten yellow cards by March 2017 including one in each of his four previous games.

Illarramendi scored a career-best seven goals in 2017–18, including braces in home and away victories over Deportivo de La Coruña. He had already exceeded his professional output for his whole career by February with his fifth goal.

On 30 August 2019, Illarramendi suffered a broken fibula in a Basque derby match against Athletic Bilbao; it was presumed the injury would keep him out for a few months, but it was found he required surgery to his shin and ankle ligaments, and he did not feature again prior to the season being halted in March 2020 due to the COVID-19 pandemic in Spain. The delay seemed to have given him time to return before its conclusion, but in June 2020 he suffered a further muscle injury on the training ground, and made no further appearances.