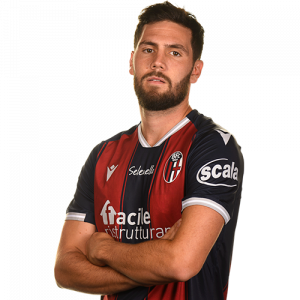 Arturo Calabresi (17 March 1996) is an Italian professional footballer who plays as a centre back for Serie A club Cagliari on loan from Bologna.

Roma
Calabresi is a product of A.S. Roma’s youth academy where he played since 2007. On 24 July 2014, Calabresi made his unofficial debut for Roma in a friendly match, as a substitute replacing Ashley Cole in the 62nd minute of a 1–0 win over Liverpool.

Loan to Livorno
In the summer of 2015 he was loaned to Livorno in Serie B on a 6-month loan deal. On 8 August, Calabresi made his debut for Livorno as a substitute replacing Federico Ceccherini in the 66th minute of the second round of Coppa Italia in a match won 2–0, after extra-time, against Ancona. On 16 August he played in the third round of Coppa Italia, where he was replaced by Federico Ceccherini in the 104th minute of a match lost 2–0, after extra-time, against Carpi. Calabresi made his Serie B debut on 12 September in a 2–1 away win over Como. On 18 September he scored his first professional goal in the 68th minute of a 3–1 home win over Brescia. Calabresi finished his loan at Livorno with 12 appearances and 1 goal.

Loan to Brescia
At mid season, during the January 2016 transfer window, Calabresi was sent on loan again, this time to Brescia in Serie B on an 18-month loan deal, with an option to buy. On 6 February, Calabresi made his debut for Brescia in Serie B in a 2–1 away defeat against Pro Vercelli. On 11 April he scored his first goal for Brescia in the 94th minute of a 2–2 home draw against Perugia. On 9 May he received a red card in the 66th minute of a 2–1 away defeat against Spezia. Calabresi ended his second part of the season with Brescia with 14 appearances, 1 goal and 1 assist.

Calabresi played his first match of the season on 7 August in the second round of Coppa Italia in a 2–0 home defeat against Pisa. On 27 August he played his first Serie B match of the season, a 1–1 away draw against Avellino. On 21 January 2017, he was sent off for two yellow cards in the 65th minute of a 2–0 home defeat against Avellino. Calabresi ended his loan with Brescia with 31 appearances, in total he made 44 appearances, 1 goal and 1 assist for Brescia.

Loan to Spezia and Foggia
On 7 July 2018, Calabresi was signed by Serie B side Spezia on a season-long loan deal. On 19 September he made his debut for Spezia as a substitute replacing Luca Vignali in the 60th minute of a 1–0 home win against Novara. On 23 September, Calabresi played his first match as a starter, a 2–0 away defeat against Salernitana. In January 2018, Calabresi was re-called to Roma leaving Spezia with only 2 appearances.

Bologna
On 21 June 2018, Bologna confirmed the signing of Calabresi from Roma for an undisclosed fee.

Loan to Cagliari
On 22 January 2021 he joined Cagliari on loan.