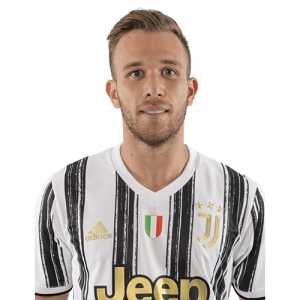 Arthur Henrique Ramos de Oliveira Melo (born 12 August 1996), commonly known as Arthur or Arthur Melo, is a Brazilian professional footballer who plays as a midfielder for Serie A club Juventus and the Brazil national team.

Born in Goiânia, Arthur began his career with Grêmio, and won the Copa Libertadores in 2017. He signed for Barcelona for an initial fee of €31 million in 2018. Arthur joined Italian club Juventus in 2020.

Arthur made his senior debut for Brazil in 2018 after previously being capped by Brazil youth team at under-17 level. He was later part of the squad that won the 2019 Copa América.

On 29 June 2020, Barcelona announced that they had reached an agreement with Juventus for the transfer of Arthur on a five-year contract for €72 million, plus €10 million in variables; the deal was also coordinated with a swap of Miralem Pjanić. He made his club and Serie A debut on 27 September, coming on as substitute in a 2–2 away draw against Roma.