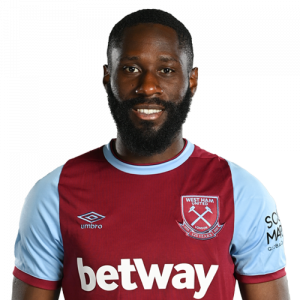 Fuka-Arthur Masuaku Kawela (born 7 November 1993), known as Arthur Masuaku, is a professional footballer who plays as a wing-back or left back for Premier League club West Ham United and the DR Congo national team. He began his senior career with Valenciennes, and has also played for Olympiacos. He represented France at the youth level.

On 8 August 2016, Masuaku joined West Ham United on a four-year contract for a £6.2 million fee. He made his West Ham debut in a 2–1 away defeat to Chelsea on 15 August 2016. Masuaku admitted that he found his Premier League debut very tough due to the pace and physicality of the league. He scored his first goal for West Ham in an EFL Cup tie against Bolton Wanderers on 19 September 2017.

In the FA Cup fourth round game against Wigan Athletic on 27 January 2018, Masuaku was sent off for spitting at Wigan’s Nick Powell following a challenge. It was the first sending-off of Masuaku’s career. Masuaku apologised for the sending off, saying the incident was “totally unacceptable and out of character”. He received a six match ban for the offence.

In July 2019, having played 75 times for West Ham, Masuaku signed a contract extension with the club until 2024 with an option to further extend the contract for two years.

Having represented France at under-18 and under-19 level, Masuaku switched his allegiance to DR Congo in June 2017. In August 2017, he was called into his first DR Congo squad, for two 2018 World Cup qualification games against Tunisia. In March 2018, still yet to make his international debut, Masuaku travelled with the DR Congo squad for a friendly against Tanzania. He was one of four players to drop out before the game, amidst claims of organisational problems and travel disorder, and did not appear. He made his debut on 13 October 2018, starting in a 1–2 home loss against Zimbabwe in a 2019 Africa Cup of Nations qualification game. Masuaku scored his first goal for DR Congo, a free-kick, in a 1-1 away draw with Kenya on 15 June 2019.