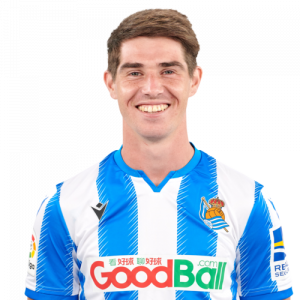 Aritz Elustondo Irribarria (born 28 March 1994) is a Spanish professional footballer who plays for Real Sociedad mainly as a right back but also as a central defender.

Born in San Sebastián, Gipuzkoa, Basque Country, Elustondo graduated from Real Sociedad’s youth system. On 13 July 2012, he was loaned to Tercera División club SD Beasain, and made his senior debut for the latter.

Elustondo returned to his alma mater in June 2013, and was assigned to the reserves in Segunda División B. On 31 January 2014 he signed a new contract, running until 2016.

On 14 January 2015, Elustondo made his first-team debut, starting in a 2–2 home draw against Villarreal CF in the round of 16 of the Copa del Rey. He first appeared in La Liga three days later, in a 0–1 home loss to Rayo Vallecano.

Elustondo scored his first professional goal on 31 January 2015, but in a 1–4 defeat at Real Madrid. On 3 January of the following year, after being regularly used by new manager Eusebio Sacristán, he signed a new contract with the Txuri-urdin until 2020.