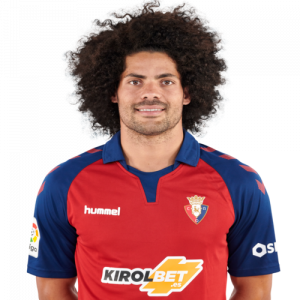 Aridane Hernández Umpiérrez (born 23 March 1989), commonly known as just Aridane, is a Spanish footballer who plays for CA Osasuna as a central defender.

In July 2008 Aridane returned to Valladolid, being assigned to the reserves in Tercera División. He was first summoned to a La Liga match on 23 May 2009, but remained on the bench in a 1–2 home loss against Sporting de Gijón.

On 5 August 2010 Aridane moved to AD Ceuta in Segunda División B; after appearing sparingly he moved to fellow league team Deportivo Alavés roughly a year later. In the 2012 summer he signed for CD Corralejo in the fourth tier, but moved to CD Eldense in the same division on 27 December.

On 9 July 2015, after nearly signing for UE Olot, Aridane signed a two-year deal with La Liga side Granada CF, and was loaned to Cádiz CF also in the third tier on 19 July. After contributing with 33 appearances in the latter’s promotion campaign, he signed a permanent three-year deal with the club on 18 July 2016.

On 17 July 2017, Aridane signed a four-year contract with fellow second tier club CA Osasuna, for a transfer fee of €1.5 million. In his first season with the new club he played 29 matches in Segunda División, among them 26 as a starter. He also scored one goal in the match against Rayo Vallecano in the Campo de Fútbol de Vallecas when Osasuna won 3:0. It took place on September 10, 2017.