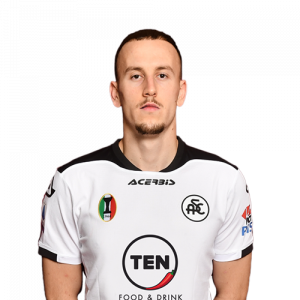 Ardian Ilmi Ismajli (born 30 September 1996) is an Albanian professional footballer who plays as a defender for Serie A club Spezia.

Hajduk Split
In February 2016, Ismajli signed a three and a half year scholarship contract with Croatian First Football League side Hajduk Split after a trial. Ismajli initially played for Hajduk Split II in the 3. HNL. On 14 May 2016, he made his senior debut for Hajduk against Zagreb in the Croatian First Football League and playing the full 90 minutes as a central defender in a 3–2 win. Ismajli was booked in the 48th minute.

In the 2016–17 season, Ismajli became a regular player under coach Marijan Pušnik. In the first match of the season, a 2016–17 UEFA Europa League second qualifying round match against Politehnica Iași in Romania, he was included in the match day squad, but did not participate in the match. Ismajli started the next match in a 2–0 league win over newly-promoted Cibalia and playing as right back. On 18 August 2016, he made his UEFA Europa League debut in a 2–1 defeat against Maccabi Tel Aviv at Netanya Stadium in the playoff round after being named in the starting line-up. On 21 August 2016, Ismajli scored his first goal for Hajduk in a 4–2 defeat against Rijeka at Poljud Stadium.

Spezia Calcio
In September 2020, Ismajli signed a three-year deal with Italian club Spezia. He joined the club ahead of their first ever season in the Serie A.