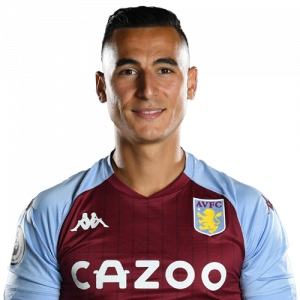 Anwar El Ghazi (born 3 May 1995) is a Dutch professional footballer who plays as a winger for Premier League club Aston Villa and the Netherlands national team.

On 22 August 2018, El Ghazi signed for Championship club Aston Villa on a season-long loan, with a clause to buy included. He made his debut on 25 August 2018 in a 1–1 draw with Reading, providing an assist by crossing the ball to Ahmed Elmohamady, who scored a header.

On 28 April 2019, in a heated contest between Aston Villa and Championship playoff rivals Leeds United at Elland Road, El Ghazi was mistakenly shown a red card by referee Stuart Attwell. This occurred after El Ghazi allegedly struck Leeds forward Patrick Bamford during an on pitch brawl following Mateusz Klich’s controversial 72nd opening goal for Leeds United following Tyler Roberts’ refusal to put the ball out of touch for an injury. The decision was met with controversy from fans and pundits alike, with Aston Villa head coach Dean Smith claiming that after reviewing the footage of the incident reported that he’d be ‘amazed’ if the red card and subsequent three-game ban weren’t overturned after appeal. The red card and ban were later rescinded and on 2 May, Bamford was banned for two games for “successful deception of a match official”.

On 27 May 2019, El Ghazi scored Aston Villa’s first goal in their 2–1 EFL Championship Play-off final victory over Derby County. In the 44th minute he met an Ahmed Elmohamady cross from the right with an attempted diving header which diverted in off his back. In the second half an El Ghazi shot from just outside the penalty area was blocked by Richard Keogh, looping up for John McGinn to steal in and score with a header, putting Aston Villa 2–0 up in the tie on 59 minutes.

El Ghazi signed for Villa permanently on 10 June 2019 on a four-year contract for an undisclosed fee.