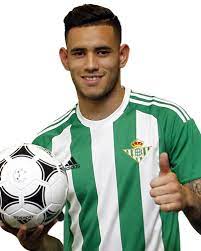 Arnaldo Antonio Sanabria Ayala (born 4 March 1996), also known as Tonny Sanabria, is a Paraguayan professional footballer who plays as a striker for Italian club Torino and the Paraguay national team.

Barcelona
Born in San Lorenzo, Paraguay, Sanabria started his career in futsal, later moving to football. He joined Cerro Porteño’s youth academy in 2004. In 2007, he and his parents moved to Spain, and he joined a local club from Sitges, called La Blanca Subur CF.

Sassuolo
On 29 January 2014, Sanabria joined fellow Serie A side Sassuolo, for a €4.5 million fee, plus €7.5 million bonuses “dependent on the player’s performance and his future value”.

Roma
Sanabria officially joined Roma in July 2014 for €4.926 million (including €2.5 million from Roma via Sassuolo to Barcelona). Roma also took the contractual responsibility from Sassuolo, to pay Barcelona up to an additional €7 million for bonuses.

Sporting de Gijón (loan)
On 11 August he returned to Spain, after agreeing to a one-year loan deal with La Liga side Sporting de Gijón. Sanabria made his La Liga debut on 23 August 2015, starting in a 0–0 home draw against Real Madrid.

Betis
On 15 July 2016, Sanabria signed a five-year deal with Real Betis for a fee of €7.5 million, with Roma retaining a 50% clause on the following transfer and a re-buy clause.

On 20 September 2017 he scored the winning goal in Real Betis’ 1-0 win over Real Madrid. It was Betis’ first win at the Bernabeu since October 1998, when Finidi George scored in another 1-0 victory.

Torino
On 31 January 2021, Sanabria signed a four-year contract with Torino in the Serie A.