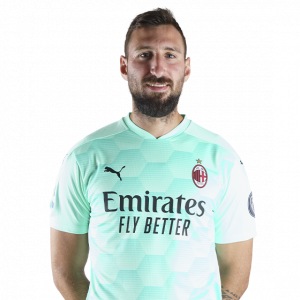 Antonio Donnarumma (born 7 July 1990) is an Italian footballer who plays as a goalkeeper for Serie A club Milan.

On 12 July 2017, Donnarumma re-joined his brother Gianluigi at Milan, signing a four-year deal. Due to injuries to both Milan’s first choice keeper and Donnarumma’s brother, Gianluigi, as well as the club’s second goalkeeper, Marco Storari, Antonio made his Milan debut on 27 December 2017 against Inter Milan in a Derby della Madonnina match in the Coppa Italia, keeping a clean sheet over 120 minutes in a 1–0 victory after extra time. He made his European debut on 22 February 2018, in the second leg of a 1–0 home victory over Ludogorets in the round of 32 of the Europa League.

After a season without appearances, Donnarumma was rumored to have been placed on the transfer market, primarily due to his unusually high yearly salary of €1 million for a third-choice goalkeeper. However, as no transfer move happened during the summer of 2019, he remained on the team. On 15 January 2020, Donnarumma made his third appearance for the club in a 3–0 home win against S.P.A.L. in the round of 16 of Coppa Italia, once again keeping a clean sheet. As a result, he became the first goalkeeper in Milan’s history not to concede goals within 300 minutes of play since the debut appearance.