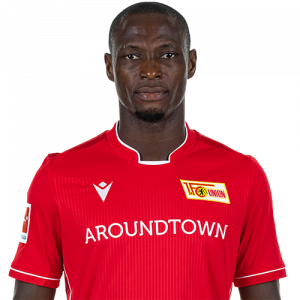 Anthony Ujah (born 14 October 1990) is a Nigerian professional footballer who plays as a forward for Bundesliga side 1. FC Union Berlin and the Nigeria national team.

Lillestrøm
Having impressed while attending the trial, Ujah signed a four-year contract with Lillestrøm and made his debut for the club on 14 March 2010 against Aalesunds FK.

In January 2011, Ujah was linked with a move to England with Football League One clubs Swindon Town and Southampton reportedly interested. On transfer deadline day, Ujah travelled to La Liga side Mallorca to discuss a move after Lillestrøm accepted a bid for the striker. However, no deal was signed, and Ujah started the 2011 campaign still in the Norway with Lillestrøm.

Mainz 05
In June 2011, Ujah signed for 1. FSV Mainz 05, after being tracked by several clubs, most notably Danish outfits F.C. Copenhagen and Brøndby IF. Ujah scored his first two goals for his new club in a 3–1 victory over VfB Stuttgart on 4 November, ending his side’s winless run that stretched back to mid-August and moved them three points clear of the relegation zone.

Werder Bremen
On 5 May 2015, SV Werder Bremen announced that they had signed Ujah on a four-year contract, starting from the 2015–16 season. On 24 October, Ujah scored a brace against his former club Mainz as Werder earned a 3–1 away win following five successive defeats. Four days laters, he netted again, helping Werder to a 1–0 victory over his former club 1. FC Köln in the second round of the DFB-Pokal.

Liaoning Whowin
On 5 July 2016, Werder Bremen announced Ujah would be joining Liaoning Whowin pending a medical for a reported transfer fee of €13 million. Both player and club had rejected a similar offer from Liaoning Whowin in the previous winter transfer window.

Return to Mainz 05
In December, it was announced that Ujah would return to the Bundesliga having re-signed with former club 1. FSV Mainz 05 on a ​3 1⁄2-year contract until 2021.

Union Berlin
In June 2019, Ujah’s move to 1. FC Union Berlin, newly promoted to the Bundesliga, for the 2019–20 season was agreed. Ujah signed a three-year deal.