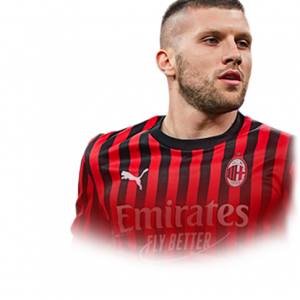 Ante Rebić (born 21 September 1993) is a Croatian professional footballer who plays as a winger for Serie A club Milan and the Croatia national team. He can play on both wings, as well as a second striker.

He began his senior career at RNK Split, and in 2013 signed for Serie A club Fiorentina for an undisclosed fee. He spent most of his time there out on loan to RB Leipzig, Hellas Verona, and Eintracht Frankfurt, before joining the later permanently in July 2018. In September 2019, he returned to Italian football, joining Milan, initially on a two-year loan, before joining permanently a year later.

Rebić made his senior international debut for Croatia in 2013. That same year, he was voted Croatian Football Hope of the Year. He represented them at the FIFA World Cup in 2014 and 2018, reaching the final of the latter.

On 12 September 2020, Milan exercised their option to purchase Rebić permanently, and signed the player on a five-year contract. On 27 September, he won a penalty that Franck Kessié successfully converted into the first goal of the 2–0 victory over Crotone; however, in the 58th minute of the game, he fell during a counterattack and dislocated his elbow. He returned to the team on 1 November, coming on for Rafael Leão in the 71st minute of the 2–1 victory over Udinese. On 23 December, he scored his first goal of the season, the opening goal in the 3–2 victory over Lazio. On 6 January 2021, he tested positive for COVID-19 and was ruled out of the derby against Juventus, which Milan lost 3–1, their first defeat of the season. On 28 February, he scored the winning goal in the 2–1 victory over Roma. On 9 May, he scored a spectacular goal in a 3–0 victory over Juventus, winning Milan crucial three points for the Champions League qualification. Three days later, in a 7–0 routing of Torino, he provided Theo Hernandez with an assist for the fourth goal before scoring a hat-trick.