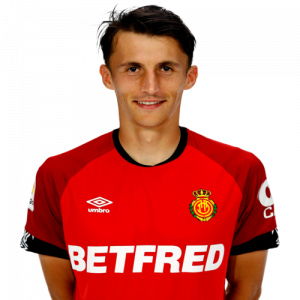 Ante Budimir (born 22 July 1991) is a Croatian professional footballer who plays as a forward for Spanish club Osasuna and the Croatia national team.

FC St. Pauli
In August 2014, Budimir joined German club FC St. Pauli of the 2. Bundesliga on a four-year deal until 2018. St. Pauli had to pay a transfer fee believed to be around €900,000. In an interview on Budimir’s signing, former Croatian international Jurica Vranješ described him as “tall, strong in the air, and reliable in combinations” and compared his style to Dimitar Berbatov. Budimir had a tough time at St. Pauli, scoring just 1 goal in 20 appearances in the St. Pauli shirt.

Crotone / Sampdoria
On 1 September 2015, Budimir was loaned out to Italian club Crotone for the remainder of the season. He made his Crotone debut on 7 September 2015, in a 4–0 loss to Cagliari Calcio, coming on as a 71st-minute substitute for Pietro De Giorgio. In March 2016, Crotone exercised their €1 million buyout option on the player. Budimir ended the season as Crotone’s top goalscorer with 16 goals in 40 Serie B appearances, as they were promoted as runners-up to Cagliari; this tally was fourth for goalscorers in the whole league season.

In June 2016, ahead of Crotone’s debut Serie A season, Sampdoria of the same league activated Budimir’s release clause believed to be in the region of €1.8 million, and the player signed a deal ending in mid-2020. A year later, he was sent back to Crotone on a one-year loan with obligation to buy. The obligation was fulfilled by now relegated Crotone at the end of the season, and he remained in the club on a permanent contract.

Mallorca
On 15 January 2019, Budimir moved on loan to Spanish club Mallorca. He scored his first goal for the Balearic club on 3 February as a Panenka penalty kick in a 2–0 home win over AD Alcorcón, later being sent off. On 27 June, after achieving promotion to La Liga – he scored the opening goal as they overturned a 2–0 first-leg deficit to defeat Deportivo de La Coruña 3–2 on aggregate in the play-off final – he signed a permanent deal for a €2.2 million fee.

Osasuna
On 7 June 2021, CA Osasuna announced the signing of Budimir on a permanent deal, after spending the previous season on loan at the club. The contract expires in the summer of 2025.