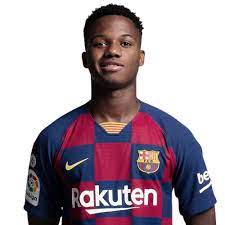 Anssumane “Ansu” Fati Vieira (born 31 October 2002) is a Spanish professional footballer who plays as a forward for Barcelona and the Spain national team.

He was born in Guinea-Bissau but represents Spain internationally. He is widely considered one of Spain’s most exciting football talents, and one of the best young players in the world.

Barcelona
Early career
After representing local side Herrera and the youth teams of Sevilla, he joined Barcelona’s La Masia in 2012, aged ten, a year after his brother had made the same move.

2020–21 season
On 23 September 2020, Fati was officially promoted to the first team. Four days later, in Barcelona’s first match of the 2020–21 La Liga season and the first under new head coach Ronald Koeman, Fati scored a brace and forced a penalty in a 4–0 win over Villarreal. He scored again in the following match, a 3–0 away win over Celta Vigo on 1 October. His performances led to him being named as the La Liga Player of the Month for September 2020. On 20 October, he scored a goal in a 5–1 win over Ferencváros in the Champions League, to become the first player to score more than one goal in the competition before turning 18. On 24 October, he scored a goal in a 1–3 defeat against Real Madrid, to become the youngest scorer in El Clásico, aged 17 years and 359 days old. On 7 November, Fati suffered a knee injury against Real Betis and was subbed off at half-time; tests later confirmed that he tore his meniscus on his left knee. Two days later he underwent surgery and the club announced that he would be out for approximately four months.