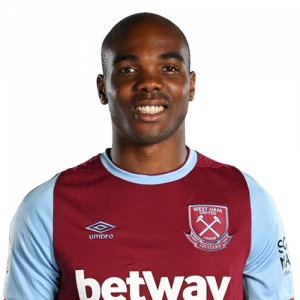 Obinze Angelo Ogbonna (born 23 May 1988), known as Angelo Ogbonna, is an Italian professional footballer who plays as a centre back for Premier League West Ham United and the Italian national team.

Ogbonna was born to Nigerian parents who emigrated to Italy from Nigeria in 1983, settling in the city of Cassino in the central part of the country, but managed to obtain Italian citizenship only after his 18th birthday.

On 22 December 2008, Ogbonna survived a car accident near Turin after he lost control of his Smart car and drove off a bridge into a torrent at around 5:00 AM.

A strong and powerful central defender, Ogbonna is primarily known for his outstanding physical attributes; he is also a competent tackler, and possesses a good positional sense, as well as an ability to read the game. He is also capable of playing as a left-back on occasion, due to his pace, technique, ball skills, vision, and distribution with his left foot.

He signed for Torino in 2002, having previously been a member of Nuova Cassino’s youth set-up. Ogbonna made his debut in Serie A at the age of 18 under Alberto Zaccheroni. After a loan spell at Crotone in Serie C1, he returned to Torino, with whom he played for a further five seasons. In July 2013, he transferred to city rivals, Juventus, winning the Scudetto in 2013–14 and 2014–15, as well as the 2013 Supercoppa Italiana and the 2014–15 Coppa Italia.