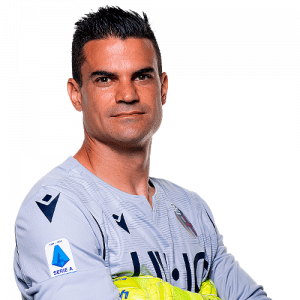 Angelo Esmael da Costa Júnior (born 12 November 1983) is a Brazilian professional footballer who plays for Italian club Bologna as a goalkeeper. He was known as Júnior Costa in Brazil, and as Angelo Da Costa (or simply Da Costa) in Italy and the UEFA Champions League.

He signed an improved contract with Santo André of Brasileiro Série B in April 2005, which run until December 2008. At the 2005 Copa Libertadores he was Júlio César Martins’ backup, except in one game against Cerro Porteño.

He was the backup keeper for Marcelo Bonan at 2006 Campeonato Brasileiro Série B. He made his league debut on 25 August 2006, replacing Bonan in the 23rd minute.

During the summer of 2008, he signed for Ancona for an undisclosed fee.

Sampdoria
Da Costa was given permission to negotiate with Sampdoria in July, days before the expel of Ancona from professional league due to financial regulation. He became the second keeper of the team, behind another new signing, Gianluca Curci, as the team released Luca Castellazzi, Matteo Guardalben, sold Antonio Mirante, did not buy Mario Cassano and failed to buy Marco Storari. He was assigned shirt number 1 previously owned by Castellazzi and made his first start in Serie A on 8 May 2011, the Derby della Lanterna. That match was the second last match of round 36 (and was the third last round); Lecce had already secured three points before the kick off of the derby and eventually Samp lost 1–2 through a late goal by Mauro Boselli. Sampdoria dropped into the relegation zone by two points short with Lecce. In the next round he remained as starting keeper, as Curci remained unfit, He conceded two goals, the first by Lecce native Fabrizio Miccoli as Samp lost to Palermo 1–2 and were relegated, while Lecce won the local derby against Bari.

Da Costa played 15 games in 2011–12 Serie B. Initially the backup of Sergio Romero, he was made first-choice goalkeeper after Romero’s injury. In the promotion playoffs, Romero was on international duty and missed the first rounds, and da Costa played the matches contributing to a win against Sassuolo. Romero temporarily returned to Samp for the first leg of the finals on 6 June, however Romero left again for the return leg. Da Costa once again became first-choice goalkeeper for the return leg in Varese’s Stadio Franco Ossola.